Koha 19.11 will have a new feature for Claims Returned.

ClaimReturnedChargeFee -When marking a checkout as "claims returned”:

If set to Charge, Koha will charge the Patron the Replacement Price of the Item when it is set to Claims Returned.

If set to Don’t Charge, Koha will not charge the Patron.

If set to Ask to Charge, when an item is set to Claims Returned, there is a checkbox to either charge/don’t charge.

Image below is if your library chooses "Ask to Charge"

ClaimReturnedLostValue : Use the LOST authorised value X to represent returns claims. The X will be filled in with the numeric value that was assigned under the LOST authorized Value.

ClaimReturnedWarningThreshold: Warn librarians that a patron has excessive return claims. If the patron has claimed the return of more than Y items. If a library would like to set up a limit to the number of claimed returned that the patron can have, this can be done through this system preference. Once the number of claims has reached this threshold, the running total of claims returned will appear in the Attention portion of the patron's account.

From the Patron’s Checkouts:

With the introduction of Claims Returned, there is now a new tab on the Patron’s Account and Detail screen. This tab shows the “Claims Returned” and how many outstanding claims have been made.

Also, next to each of the patron’s checkouts, there is a new column allowing staff to mark a checkout as “Claimed”. 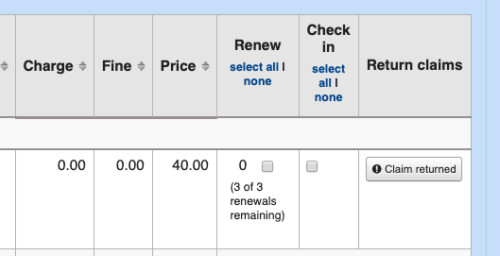 The Process on which to Claim an Item

When a patron states that they have returned an item, from the patron’s checkouts, staff can choose to “Claim Returned”.

This will provide a popup- notes can be made about this particular claim returned and if a choice to charge the patron is indicated from the system preference, ClaimReturnedChargeFee, then this will also be an option.

The Return of a Claimed Item

If a patron/library later checks in a “Claimed Returned”, there will be alert to the staff and the item will be removed from the patron's checkouts.

The item will be removed from the patron’s checkouts.

The claim itself is not resolved, the staff will need to resolve this claim from the claims returned tab.

If an item is set to Claims Returned from the Items Tab, this will not work as a “Claims Returned” item as it would do it the way outlined above.

Here is a helpful 19.11 Upgrade Page to reveal more resources for Koha's release of 19.11!